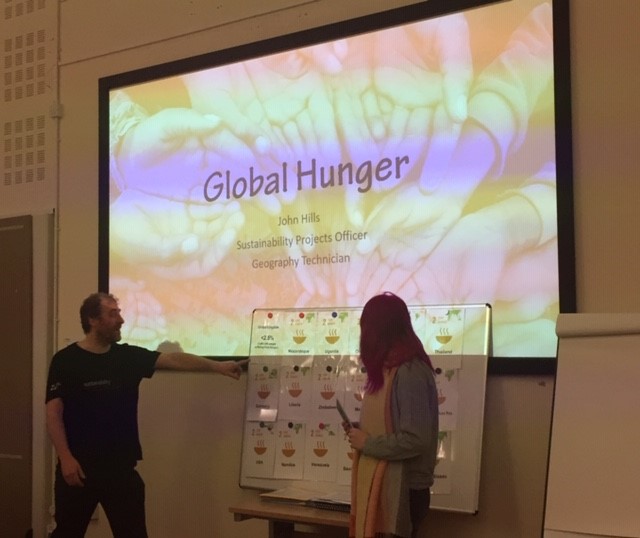 This session was run for Level 4 Tourism students as part of #SDGTeachin.  The focus was on SDG2 Zero Hunger, with inevitable links to SDG1 No Poverty.

A couple of short activities followed, representing the opportunity for social mobility (which, in the event, was only given to the friends of the rich) and the redistribution of wealth.  In one case this was given somewhat reluctantly, and was rather meagre, while the second group was seemingly more generous, but in practice were only giving away the sweets that they did not like!

This was followed by an incident that we could not have planned.  One of “the rest” decided to keep a large part of the redistributed sweets for himself.  This does, of course, have lots of global parallels, and eventually resulted in a mini revolution, and our upstart dictator was overthrown and ended up with nothing!

The second game (top picture) was based on the old TV show “Play Your Cards Right”.  In this case, the contestants were presented with one country and the percentage of its population that suffer from hunger.  They were then given the name of another country and had to guess whether that country’s hunger rate was higher or lower than the first country.  Audience participation, in the form of shouting HIGHER or LOWER was encouraged and to our satisfaction, the room was soon very loud!

As the cards for successive countries were revealed, the actual number of people in that country suffering from hunger was also revealed, emphasising the sad human aspect of this very real problem.

After a short presentation on Hunger, the class split into two for other sustainability related activities.

The first group (above) learned about EcoBricks and were given the opportunity to start making some.  This soon turned into clusters of activity, with students cutting up plastic while others frantically stuffed bottles.  Some went away promising to make them at home and donate them to the CCCU EcoBrick project.  (Please email John.Hills@canterbury.ac.uk for more information).

The second group took part in an activity called Pictures of Success. Adriana led this engaging activity to stimulate discussion about a wide range of sustainability-related issues. Created by a company called Carbonsense, who prior to 2015, worked with companies across the globe as part of a project to engage people in the UN’s Millennium Development Goals;  the PoS cards contain compelling images and inspiring quotes from real life stories of successful sustainable projects, and are based on the values and ethical principles of the Earth Charter. They are one of a range of engagement tools and games, which are available to borrow from the Sustainability team’s educational resources.

A lot of fun was had by all, we look forward to running this again!