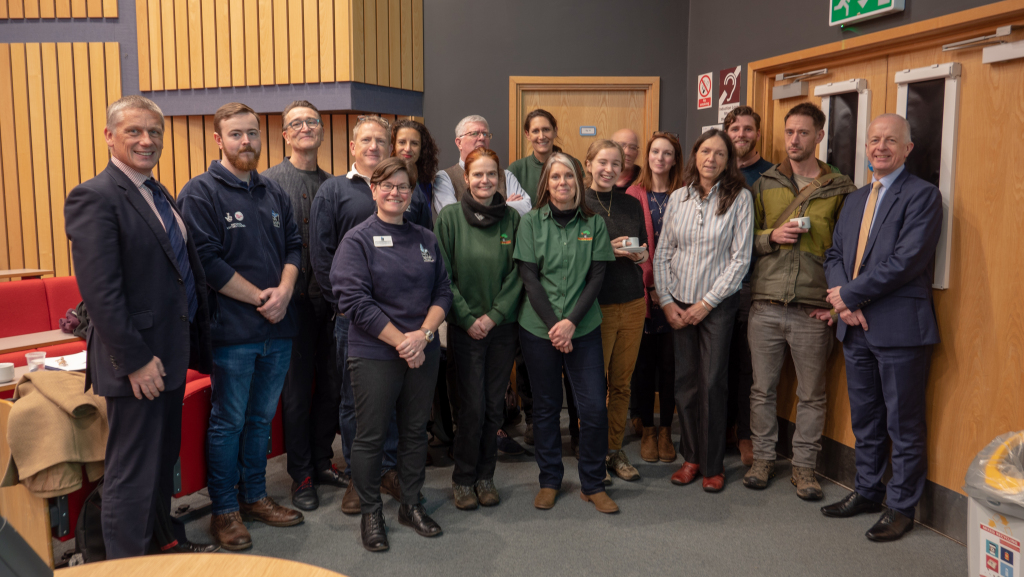 This November the University’s sustainability team hosted a debate about ‘Wilding’ Kent; the event was aimed at academics and students and provided an opportunity for discussion of ‘wilding’ and species reintroduction aimed at driving positive changes in the Kentish landscape; to restore complex habitats and improve biodiversity. The event was co-organised with Kent Wildlife Trust (KWT) and Wildwood Trust who plan to ‘wild’ the Blean through a trial release of large herbivores, including European bison within a 3000-acre area.

Speakers, introduced by Ed Charles (KWT) included Paul Hadaway (Conservation Director, KWT). According to Paul, wilding in Kent would restore landscapes by reintroducing missing species to provide natural grazing, creating dynamic mosaic habitats and enriched woodlands.  He argued that this would provide the habitat for the return and recovery of other native species such as the turtle dove. Other initiatives such as the reintroduction of the pine martin could be the first step to reintroduce the red squirrel to Kent.

Laura Gardner (Head of Conservation and Rewilding, Wildwood) discussed the work of the Wildwood Trust in native species recovery, which includes conservation breeding.  The Trust’s wildlife park is home to a collection of over seventy native or formerly native species.  Through their “Re-Wild our world” programmes they aim to “harness (their) species management expertise to drive the rewilding of ecosystems so that they are more functional, diverse and resilient.”   Their conservation programmes have focused on the recovery of red squirrels, hazel dormice, water voles, pine marten, and the chough, a significant heraldic symbol in the coat – of arms of both the city of Canterbury and CCCU!

Adriana Consorte-McCrea (CCCU and chair of the IUCN’s Human-Wildlife Interactions Working Group, of the Conservation Translocation Specialist Group) discussed the need to include people from diverse interest groups in the planning of wildling projects.  She pointed to the many benefits experienced by people that result from increased biodiversity and healthier landscapes and suggested that reintroduction is rarely conducted in spaces devoid of interactions between people and wildlife.  Cross-disciplinary research developed at CCCU indicates that people’s attitudes towards the return of native species can vary according to social economic variables, such as occupation and livelihood, education and place of residence in relation to reintroduction sites.

The event ended with a lively and informative panel discussion that as well as the speakers, included Leo Linnartz of ARK Natuurontwikkeling, a major wilding project in the Netherlands, Dr Ian Bride, conservation biologist and social scientist and Dr Iain Fraser, Professor of Agri-Environmental Economics, of the University of Kent. The Panel was chaired by Professor Peter Vujakovic (Chair of the Biodivesity and Heritage Working Group, CCCU). Peter notes “The event was a great success, but the real work starts now, and we hope our students and staff will engage in volunteer activities available as wilding develops in Kent”. Individuals are urged to contact Dr Adriana Consorte-McCrea or Prof. Peter Vujakovic for further information about wilding in Kent or engagement in CCCU’s own biodiversity initiatives.