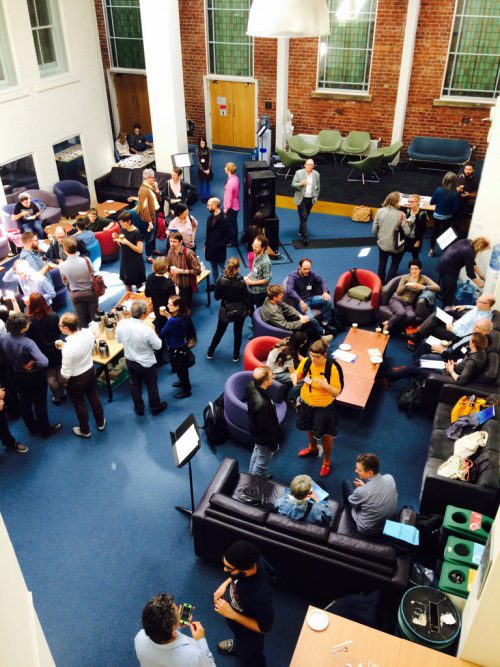 In Sophie’s work in progress session, she discussed the topic of her research, the context, her methodology and her projects so far. Sophie’s research focuses on composing experimental extended duration music and the compositional strategies, performance situations and the use of silence that surround this type of music.

Compositional strategies include: notation (e.g. graphic, text, grid and hybrids), form (e.g. one or several movements, or a series), the duration (e.g. set/open duration), instrumentation (e.g. specified instruments, open instrumentation, and fixed media) and approaches (repetition, improvisation, indeterminacy, sustained sounds and silence). Sophie noted that there are many issues in practicality with performing this type of music, instrumentation being one of them as performers will struggle to perform for several hours without breaks.

Extended duration music can also be difficult to experience and this why the performance situation is important. The traditional concert hall is not the most practical setting for this type of music. Sophie’s works will explore different performance environments such as galleries and other spaces not typically used for performance. The relationship between the audience and the performer/s has to be taken into consideration. Sophie’s works will explore different installation environments which will allow for the performers or audience members to move around, audience participation, and a choice for the audience to experience part of the work or the work as a whole.

For Sophie, silence is another significant part of compositing and experiencing extended duration music. Silence can be used as a compositional tool and the experience of silence is different depending on how it is used. Sophie listed and explained the different types of silences that she has been researching and using, they include: silence before or after sound, silence between sounds, expected and unexpected silences, other interpretations of silence such as something that is hidden from the audience and performative silence.

The key figures in Sophie’s research are John Cage, Morton Feldman and the Wandelweiser collective. She attended the Amsterdam Wandelweiser Festival in January 2017 and gave an account of a performance of Antoine Beuger’s ins ungebundene (1998):

“The performer played a single note for approximately twenty minutes which was followed by silence for a further forty minutes. The sustained note is what Edward Pearsall would describe as performative silence. The colour of this note changed over time, affected by the movement of the listener and the workings of the organ and speakers. The experience of the silence was also fascinating. The silence was sudden and unexpected. I sat there thinking about the sound that has just occurred and then waited in anticipation for another sound and time seemed to go slowly, but then I got used to the silence and time seemed to go faster.”

Sophie described her research as an iterative process which comprises composition, workshops, rehearsals and performances. Another important aspect of this process is reflection through discussion and writing as this brings to light new findings and informs what she does next and any changes that she needs to make to her compositions. Sophie’s projects so far are Amalgamations (2016), “As Sure as time…” (2016-present) and Continuum (2017).

Amalgamations is a two-movement work for solo organ, which has been performed twice by Lauren Redhead (20 and 45 minutes) and by Ben Scott (90 minutes). Sophie explained that the work is a collaboration between composer and performer as she provides a graphic score and the performer makes decisions and performs a compositional process. The score includes a key for 7 instructions for sound, pitch, manual/s, and pedal. As the instructions are grouped into types of sound and are for any number of manuals, the work can be performed on any organ. The two movements require the performer to create their own path using indeterminate instructions which either replace one another or are played in addition to the previous instruction. Each movement ends when the performer decides to finish, however the duration of the whole performance has to be a minimum of 20 minutes.

Sophie’s latest project, Continuum, is a 90-minute installation for flute, clarinet, two string instruments, tam-tam and 4-channel fixed media. With funding from the Centre and MPA, Splinter cell performed Sophie’s work at the Wintersound Festival in January 2018, which was also documented as a video. The score is unfinished and requires the completion by the director and/or performers. The score uses space-time notation with bracketed timeframes which suggest when certain instruments may play. These bracketed sections should be filled with the instructions that Sophie provides for sound, technique and dynamics. The installation set up of Continuum combined with the ethereal sustained sounds creates an immersive listening environment.

In the future, Sophie would like to create a much longer work focusing on sustained sounds. You can hear performances of Sophie’s work on SoundCloud.