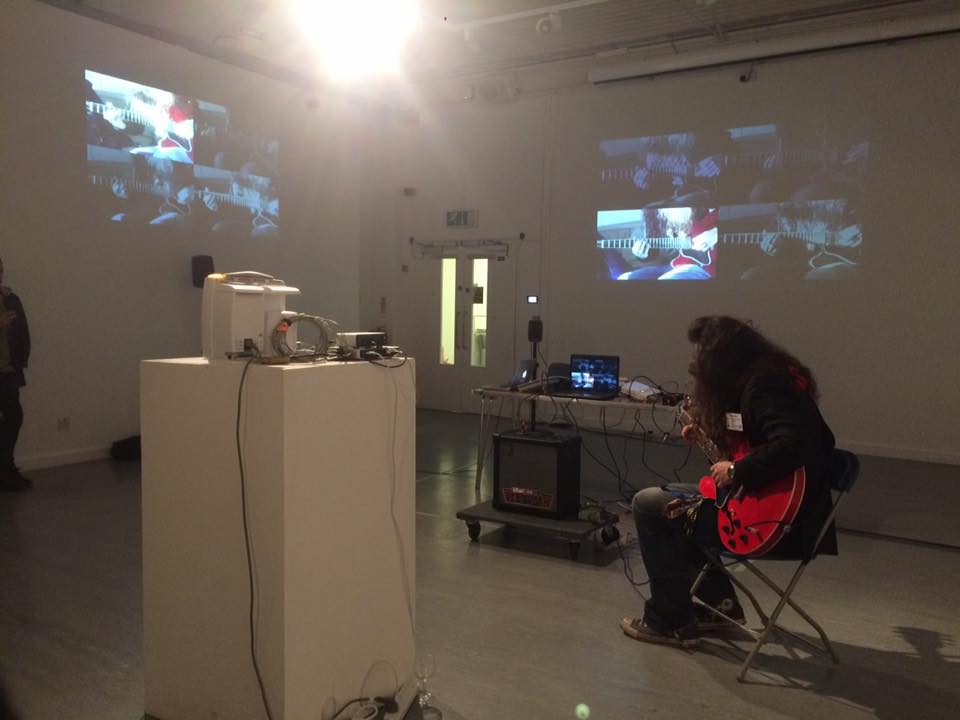 Joe Inkpen will present at our second work in progress session on 14th November in MDf06.

He will present his work in polytemporal composition, of which ‘The Disconnect’ is a recent example. Watch a video of a live performance here.

‘The Disconnect is a polytemporal composition for two pairs of performers; each guitar and drum duo features their own independent tempo (positioned at each side of the stage and wearing headphones with click track) executed simultaneously, however these conflicting tempi are calculated in such a way that they provide opportunity for rhythmic unison as well as ‘arrhythmic’ qualities across the parts. In this way the piece explores the concept of rhythmic consonance and dissonance (a term coined by composer Conlon Nancarrow), achieving this by way of variation in terms of instrumental texture, repetition, improvisation, dynamic and harmonic change as well as rhythmic use of effects pedals. The work is in an ABCDBA form, each distinct section focusing on a different area of compositional exploration. Polytemporal composition forms the main body of my PhD research, this work providing both one of my first fully formed pieces as well as an opportunity to gain insight into practical considerations of live performance.’

Joe is a current PhD student under the supervision of Matt Wright and Nicholas McKay, working on a practise-based thesis on rhythmic composition. As a guitarist and composer Joe is undertaking research specifically on polytemporal composition, producing works for performers and groups in multiple tempi as well as generating and analysing new compositional methods for this kind of material. The research covers such concerns as the notion of complexity as well as accessibility, notation and how the work is ultimately displayed aesthetically beyond its aural reception. During his studies so far Joe has performed works at LAbO in Antwerp, January’s RMA/BFE conference and most recently Canterbury’s Drone Cellar ambient/experimental event. Joe will be presenting and demonstrating some of these techniques using recent compositions, including a new work due to be performed by the Leon Quartet at Free Range on December 7th.