Temporary implants and the human body

At the 2017 symposium, Shanbaum discussed her current project “are we human or are we cyborg?”. She described implants as a technological device that aims to support, mediate or enhance pre-existing biological structures in the human body. The project analyses the utopian and dystopian stories told around these technologies and the consequent meanings attributed to them, critically examining the claims of implants, and the human and non-human relationships that the claims provoke and create. The project involves an artistic, collaborative and cross-disciplinary discussion, and an exploration from a humanities context, that can perhaps reconfigure our human relationship with technology. The notion that implants matter is at the heart of this project.

Shanbaum’s project is currently a work in progress, therefore her talk aimed to contextualise the project by talking about her aims and previous research. She focused on the notion of failure as implants will fail technically (cease to work) and conceptually (socio-political and cultural ideologies that underpin the device will be discredited, e.g. deemed outdated, racist or ablest). According to Shanbaum, experimentation largely constitutes practice-based research in the arts. One of the key things that constitutes experimentation is failure, the non-performance of what is required or expected, and deemed unsuccessful. Failure has become something that should be avoided at all costs and it evokes notions of disapproval, dissatisfaction and rejection, and feelings of anxiety, disappointment and discomfort. Failure is linked to existential and abstract notions of truth, wholeness, correctness, and power, control and ownership over bodies.

Flaws and weaknesses are often dismissed as unnecessary complications, however Shanbaum sees failure as positive and a radical potential to explore different relationships with technology. This is linked to her previous research project: ‘The Interface is Obsolete’, a critical framework for understanding the digital interface in interactive digital media installations. Her aim was to dispel the instrumental cybernetic action/reaction myth that surrounds the functions of the interface and constitutes as one of the main limitations of its conceptualisation today. Shanbaum believes that a rethinking of the interface is essential if we are to take them seriously and to engage with them on a deeper level. She concentrates on the aesthetic and cultural aspects of the interface to expand the definition of the digital interface from the direction of art history and media studies: “the digital interface is a dynamic, hybrid, aesthetic and cultural process”. Making the invisible aspects legible links the interface project to her latest project.

Shanbaum questioned, “what comes next?” and “what happens when we have thoroughly convinced ourselves that digital technology is invisible?”. She states that the next step is digital technology becoming interiorised, an implant. Her research questions: “what are bodies? Who controls the shape or forms they assume? Who or what owns the body and biological data?”. Implants can be both temporary or permanent, but her research is based on temporary implants, e.g. types of birth control, wires and screws used for healing processes that are later removed, and breast implants. Temporary implants are also used for non-medical purposes which are done at home or in tattoo and piercing parlours (the grinding community), e.g. North Sense, a device bolted to the chest that vibrates when the person is facing north. Phaedra states that implants are nonhuman technologies and are not innocent as they are not neutral or value free technologies. They are usually medical devices created by humans and give a very narrow and bias model of the world, and have a very dark history. The history represents another type of experimentation and another form of failure.

The aim of Shanbaum’s project is to explore what the terms deficient, normal and enhanced mean in relation to the human body and to critically challenge cultural assumptions around the body that these terms promote. By challenging these notions, her goal is to reveal contradictions within traditional theories of the body and its relationship to technology, linking her research to post-humanist critique, and therefore widening the definition of what it means to be human in the 21st century. The research questions for the project are: “how does the temporary implant challenge or change our current conceptualisation of the human? And, how does the version of the human that the temporary implant promotes differ from other visions and versions of the human?”. There are four phases of the project: consolidate (historical images, text, video and audio recordings), collect (documenting contemporary devices with oral and written histories), commission (collaboration with artists) and create (production of the archive). The outcome includes an archive of temporary implants, people’s lived experiences and medical records, and historical documentation, which will be available online to researchers and to the public. It will contribute to the investigation of issues around historical and contemporary perceptions of the body, embodiment, identity and technology. Phaedra referred to Rebecca Schneider when explaining that the archive is about recollecting and performing different bodies and modes of being. 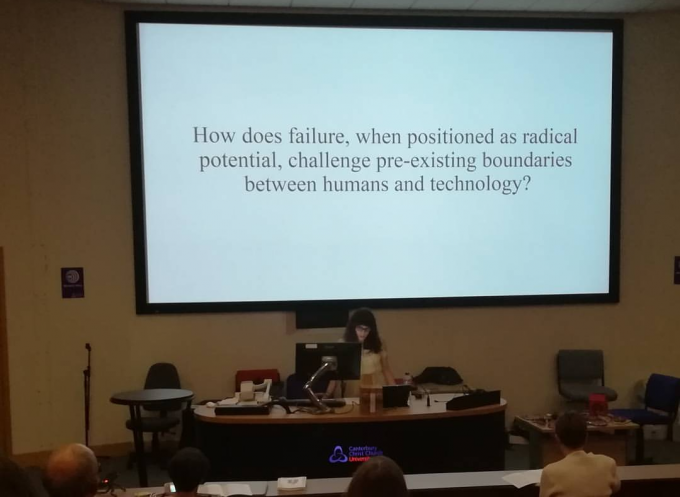