About six months ago, I mentioned to a colleague that I wanted to put together a bid for Being Human festival to support a project mapping locations in the Old English Andreas to locations in Canterbury. ‘Ooh!’ she said excitedly, ‘you need to talk to Sonia about this!’

I went and had a chat with Sonia, who said that she was interested in doing something similar with Riddley Walker. I’d read (and loved) Riddley when I first read it about ten years ago, and Russell Hoban’s writing has touched a chord with me ever since my dad read me The Mouse and His Child, Hoban’s best-known children’s book. We both agreed to reread Andreas and Riddley, and by the time we reconvened had found even more similarities between the two than first anticipated.

Coupled with our shared enthusiasm for landscapes and experience leading walking tours, we set about making grand plans for a map, website, audio recordings, and seeking support from Folkestone Book Festival and Canterbury Archaeological Trust, before we submitted a bid to Being Human Festival and crossed our fingers. Fortune smiled on us, and with this funding and some further support from Christ Church to support this and another project focused on Richborough (stay tuned!) we got started, working with our graphic designer Celia to produce our two-sided map, figuring out WordPress, which involved a lot of trial and error, and finally working with Ben Horner to make recordings of the two texts. Along the way we were contacted by BBC Radio 3, who picked us up from the Being Human programme, making a trip to interview us on location for a special edition of Free Thinking, broadcast on 16th November.

We’re hoping to do more with Riddley and Andreas, and would really like to collaborate with others who are intrigued by either of these works, so artists, musicians, and anyone and everyone else please do get in touch… 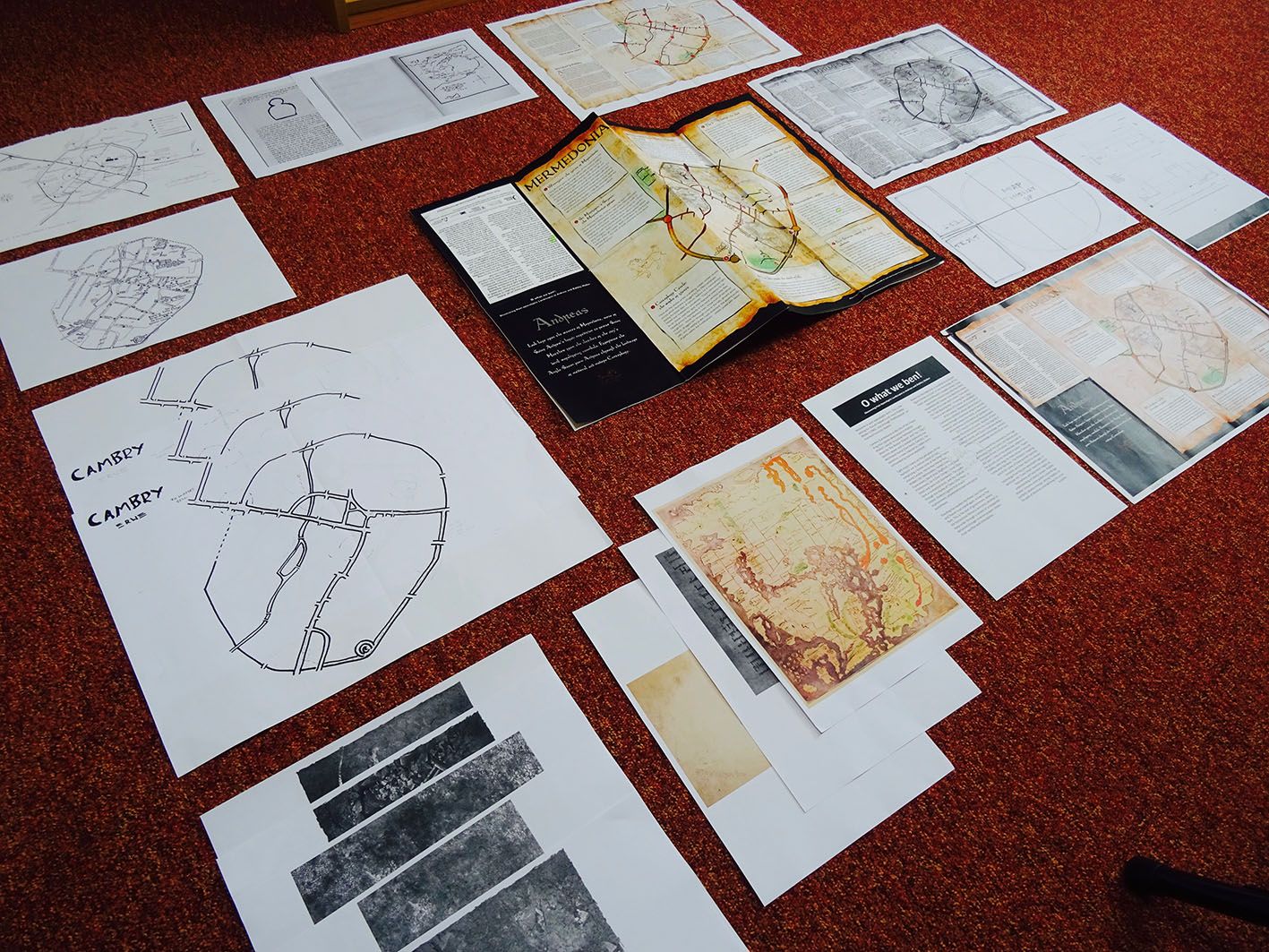 Here are some of the various materials we used to create the map, and the various different versions we went through along the way.

Mike and I work in the heart of Riddley Walker’s Inland: Cambry. Like many readers, I have poured over the map at the front of the novel, working out the correlations between Riddley’s recorded place names and the towns and villages of East Kent. It’s an amusing puzzle, but as with all fiction, it doesn’t pay to get too literal.

What matters more to me than precise mapping is the feel of places. In the summer I led a field trip to the ‘Bundel Downs’ as part of CCCU Geography department’s Sense of Place conference. The purpose was to walk with Riddley through part of the landscape of the novel. We left the ruins of Cambry by minibus and headed towards the high wooded downs above Wye, to a place where Riddley longs to walk ‘oansome’. We didn’t match site for site, but with some psychogeographical attitude, we matched the book to the place we were in. I certainly felt that I knew Riddley Walker better after this expedition. The walk attuned us to messages in the landscape, bringing us closer to an understanding of Riddley’s strange, defamiliarised world.

Transferring this experience to sites in Canterbury seemed an obvious next step. These locations are not literal mappings of sites in the book: after all, Cambry is ground zero. Rather, they represent spaces that resonate with passages of the novel, and offer a (comfortably walkable) journey through some of its themes. When Mike and I began discussing connections between Riddley Walker and Andreas, the parallels quickly became clear. Cambry is the epicentre of the explosion that destroys Riddley’s world. Like Mermedonia, the inhabitants of Inland live within the ruins of a previous civilisation. Riddley’s clashes with authority are played out against the backdrop of Cambry city’s wreckage and the dead towns of Bernt Arse and Fork Stoan. Like Andrew, Riddley witnesses, and is threatened with, injury, torture and sacrifice. The centre of Cambry and the ruins of the cathedral contain an ancient power that gives Riddley a hallucinogenic, mystical experience: he is transported and appears to speak in tongues. Like Andrew, he sees signs of redemption amongst the ruins. And after his trials, Riddley sets out on the road again as an itinerant performer: a missionary with a new story to tell and a new hope to offer.

I feel something of a missionary zeal towards this extraordinary and rather overlooked novel. Riddley Walker has a cult following, but I would like to see it celebrated more widely. I hope that this project offers a way in for new readers, and another level of appreciation for those who have already discovered Riddley and his world.

I would love to continue walking with Riddley throughout Inland – along the coast, following the Nailbourne, and tracing the perimeter of the Ram. Perhaps this will be the next phase of this project.