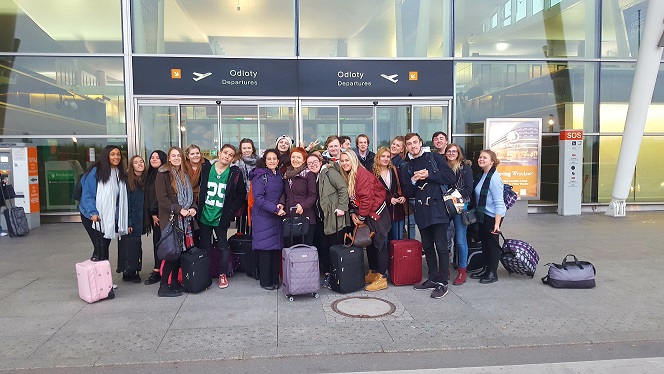 At the School of Music and Performing Arts, our teaching staff are committed to providing inspiring opportunities as part of all our courses to help enhance the knowledge and understanding of our students. These occasionally come in the form of exciting trips and visits both in the UK and around the world.

Dr Kasia Lech, Senior Lecturer at Christ Church University in Drama and Performing Arts, organised one such opportunity to travel in Europe to Wrocław, in South Western Poland. Dr Lech believes the trip to be a very unique chance for students to engage with and increase their awareness of international and intercultural arts and artists. Furthermore, it would broaden their own thinking about themselves as artists interconnected not only with local or national communities, but also with international ones.

Wrocław, one of the most culturally diverse and largest cities in Poland, was named the European Capital of Culture for 2016. The programme was proposed in 1983 as a way of having a greater emphasis placed on cultural matters in order to build togetherness and a shared identity between EU member states. Two years later, Athens became the first title-holder; since then, each year has seen one or two cities put in the spotlight for twelve months of special cultural events, which help to raise the visibility of often-underrated (or little-known) places and effectively bring about urban regeneration. Poland has had one Capital of Culture representative already, with Kraków holding the title in 2000. The title means a year full of shows, concerts, conferences, exhibitions, meetings, and other cultural events organised into eight disciplines: opera, theatre, visual arts, music, film, performance, literature, and architecture. 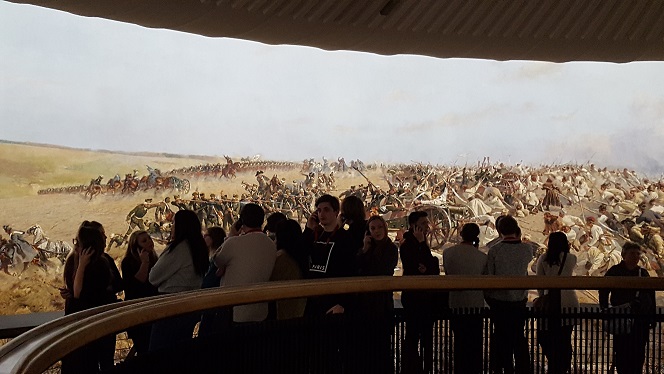 The students trip lasted four days and its goals were simple – to experience and appreciate the culture of another country, including taking a walking tour to learn the history of the area’s Jewish population in the Second World War as well as to view the architecture of the city streets and finally tasting the local cuisine. They also took in the monumental sight of the Panorama Racławicka – a cycloramic painting depicting the Battle of Racławice, during the Kościuszko Uprising. The painting is one of only a few preserved relics of a genre of 19th century mass culture, and the oldest in Poland. The panorama stands in a circular fashion and, with the viewer in the centre, presents different scenes at various viewing angles. A special kind of perspective used in the painting and additional effects (lighting, artificial terrain) create a feeling of reality – an inspiring skill, which had the capacity to translate into the student’s own work and influence them in innovative ways. However, more specifically the journey’s purpose was to create a cultural exchange between our students and staff and those studying and teaching at the Ludwik Solski Drama School as well as those specialising in the art at the University of Wrocław. These meetings were an opportunity to open up a discussion on key issues for contemporary global theatre and performing arts in general, and reflect upon their experiences and practices. Moreover, after the visit to Wrocław University, together the students from both countries created a Facebook page allowing them to further share and exchange their experiences of theatre in Poland and the UK, even after returning home. 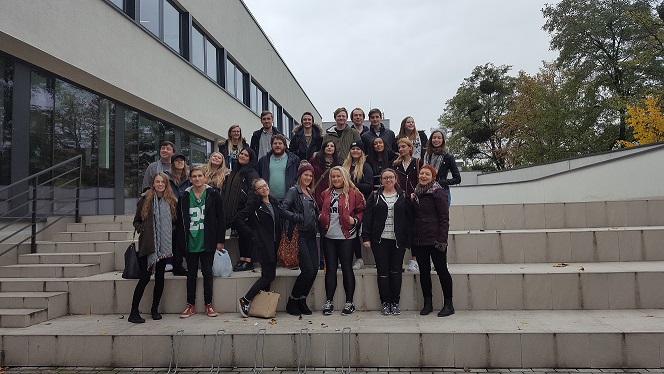 A key feature of the trip was to partake in the Theatre Olympics, which Wrocław was hosting across October and November. It is an international theatre festival that stages the work of some of the world’s foremost theatre makers. In 2016, theatre artists presenting their work included Peter Brook, Eugenio Barba, Robert Wilson, and Romeo Castellucci.

Although visiting for a relatively short time, the students were privileged to observe two outstanding performances. The students witnessed the first on their second day in Wrocław, a play entitled Go Down, Moses by Italian theatre director and playwright and one of the theatrical avant-garde, Romeo Castellucci. The work transfigures the various moments of Moses’ life as they are narrated in the Book of Exodus, wherein it portrays the events of his life that correspond with and speak to the substance of our time.

The second theatre venture on the student’s penultimate day in the city was to enjoy The Tree by Eugenio Barba – an Italian author and director – and the Odin Teatret theatre company, which Barba founded. The new and highly anticipated play is the third instalment of a “trilogy on the Innocents” – a fresco on promises and dashed hopes and a mournful look at the history of humanity, starting from the dreams of a child. Following the performance, our students were lucky enough to be able to discuss the play with Barba himself present!

In addition, our students were able to visit the site of the Grotowski Institute (where some of the plays on offer for the Theatre Olympics were performed) – a municipal cultural institution which combines artistic and research projects responding to the challenges laid down by the creative practice of the late Polish director Jerzy Grotowski as well as documenting and spreading knowledge about his achievements. This was particularly important and valuable as the students had been studying Grotowski back in Canterbury on their Theatres of the World module. 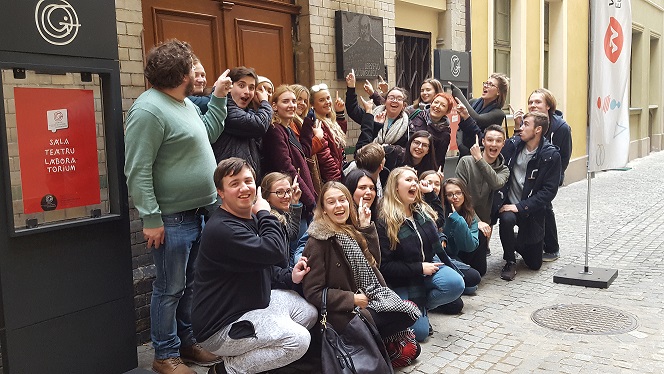 At the culmination of their trip, the students had not only gained a unique learning experience to enhance their course of study, but by means of travelling in this way had discovered a new culture as well as general and social knowledge, which enhances their own personal development as well-rounded human beings, beneficial both while at university and in their future lives thereafter. This is something it is clear that they are grateful to their lecturers within the School of Music and Performing Arts for working so hard to give to them. 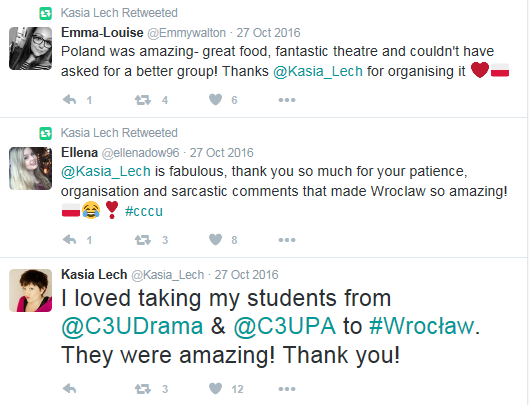