Top Voices will be taking part in a fantastic event called Walk Through the Walls: Canterbury Now and Then.

FREE for students, staff and the local community

Free for students, staff and the local community

Bringing classical stars to our students and the local community

FREE to students, staff and the community

Following the fantastic opportunity for our students to be present at the open rehearsal of the full Philharmonia Orchestra the night before, the wind section of the Chamber Players paid a visit to St Gregory’s Centre for Music to perform as our final concert of the term.

Widely acknowledged for its pioneering approach to the role of an orchestra in the 21st century, the Philharmonia leads the field for the quality of its playing and its innovative work with residencies, music education, audience development and the use of new technology to reach a global audience. Together with its relationships with the world’s most sought-after artists, most importantly its Principal Conductor and Artistic Advisor Esa-Pekka Salonen, the Philharmonia is at the heart of British musical life. The players joined us as part of the Orchestra’s wider residency at the Marlowe Theatre in Canterbury, where they performed on the 15th March and will once again on the 28th May when the Orchestra will be conducted by the legendary Maestro Herbert Blomstedt to perform Beethoven’s Seventh Symphony and Brahms Piano Concerto No.1 played by Martin Helmchen.

The four players who the audience were privileged to see perform at the University were Thomas Hancox, a principle flautist in many leading orchestras, Mark Van de Wiel, principle clarinet and well-known soloist,  Gordon Hunt, leading oboe player for four decades with experience across six continents and bassoonist Shelly Organ who performs with many of the country’s leading ensembles. 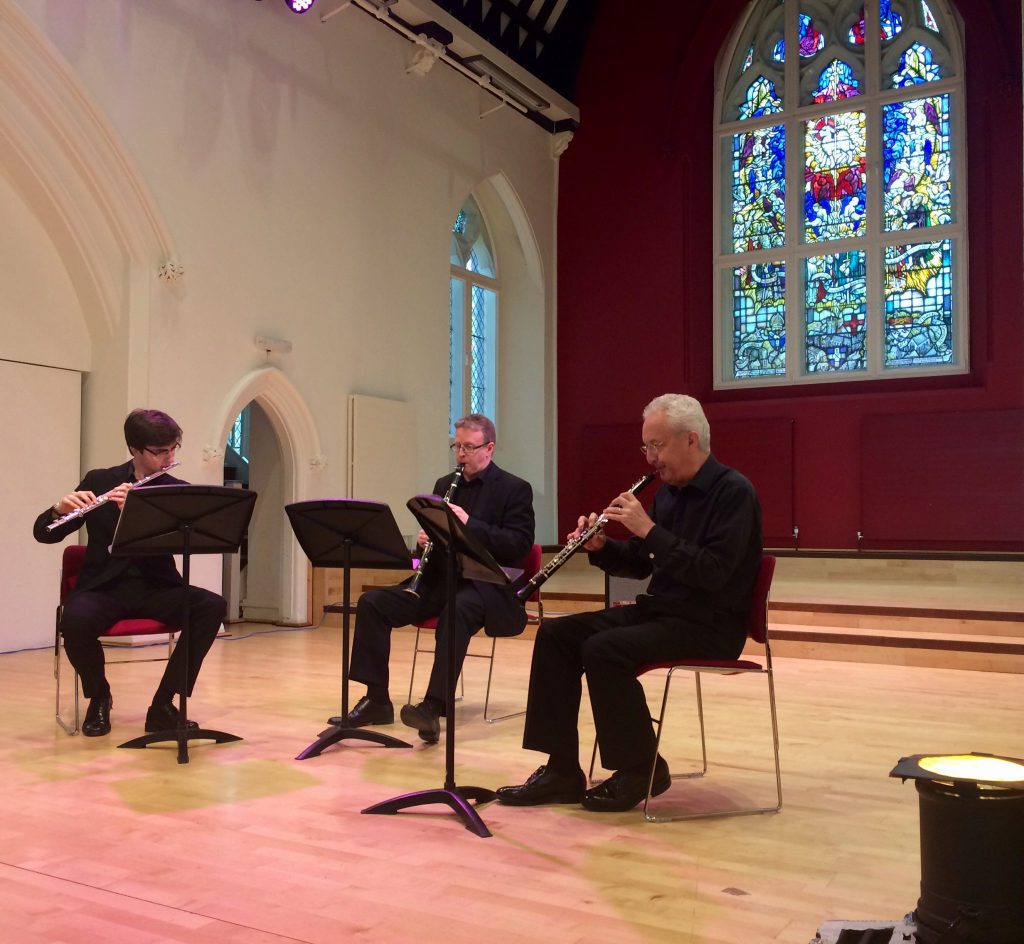 The programme began with M. Arnold’s Divertimento for Wind Trio as performed in six parts by Mark, Thomas and Gordon, with a fantastic anecdote prior to start about the composer who appeared to rarely have time to compose such beautiful music, such was his love of alcoholic distraction. Following this was B. Britten’s Six Metamorphoses after Ovid (Pan, Niobe and Bacchus). The three pieces, performed for solo oboe are a staple of the oboe repertoire, with introductions to each to set the scene given by Gordon before each one. Mark returned to the stage as Gordon exited for Three Pieces for Solo Clarinet by I.Stravinksky – a composer who famously hated being asked if the music in his concert programmes had ‘meaning’. For a man who believed music was just that and nothing more, it was interesting to hear Mark note that these three pieces did indeed come with short stories by the composer. The first depicted a mechanical toy, the second a flock of birds chased by a cat and the third and example of the new jazz at the time, or at least Stravinsky’s take on it. Shelly joined Mark for the next piece by F. Poulenc, a duo, Sonata for Clarinet and Bassoon. A piece of three movements with unconventional changes of tempo and plenty of stops and starts. Another solo piece followed, this time for flute, with C.Debussy’s Syrinx performed and explained beautifully by Thomas as a “floating, amorphous” composition. It depicts the lament of Pan for the Nymph Syrinx with whom he has fallen in love or lust. However, Syrinx does not share his affections and turns herself into bulrushes to escape from his advances. Whilst Pan laments losing her in that moment, he sits by the lakeside and absently cuts down the nearby bulrushes, unknowingly causing her death and losing her for all time. The penultimate piece gave the first and only opportunity for all four musicians to be present on the stage at once, performing J.Francaix’s neo-classical work Quartet for Wind. The final piece in the programme was quite a departure when compared to the rest. Written specifically for Shelly Organ, Axeman, was intended to expand the comparatively small repertoire for bassoon with something quite different. The title is another word for an electric guitar player and the piece is played through an amplifier replicating the sound this instrument in an amazing novel way. A fun and cheerful end to a wonderful programme of music performed and introduced by charming, talented musicians. 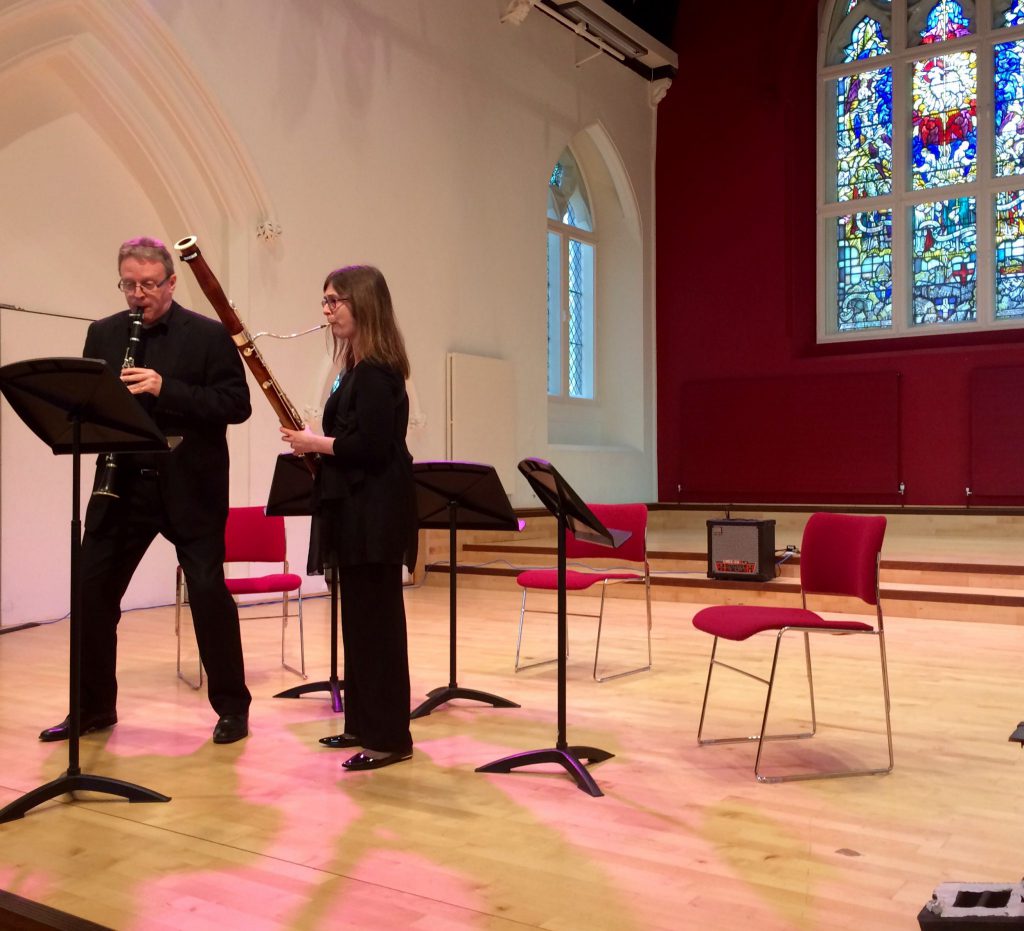 Following the concert, the Philharmonia kindly provided a masterclass for our students, led by Mark who had performed in the concert and his colleague Samuel Coles – a principal flautist who has won numerous awards and played with orchestras around the world. The lucky students to be coached by these experienced performers were alto saxophonist Helena Jukes (pictured) playing Syrinx, as in the programme, flautist Nick Chalk playing Morceau de Concours by G. Faure, trumpeter Richard Blake with M. Arnold’s Fantasy for trumpet, soprano saxophonist playing Pan from Six Metamorphoses as in the programme and the entirety of the University’s flute choir with a change of pace performing The Great Escape March by Bernstein. 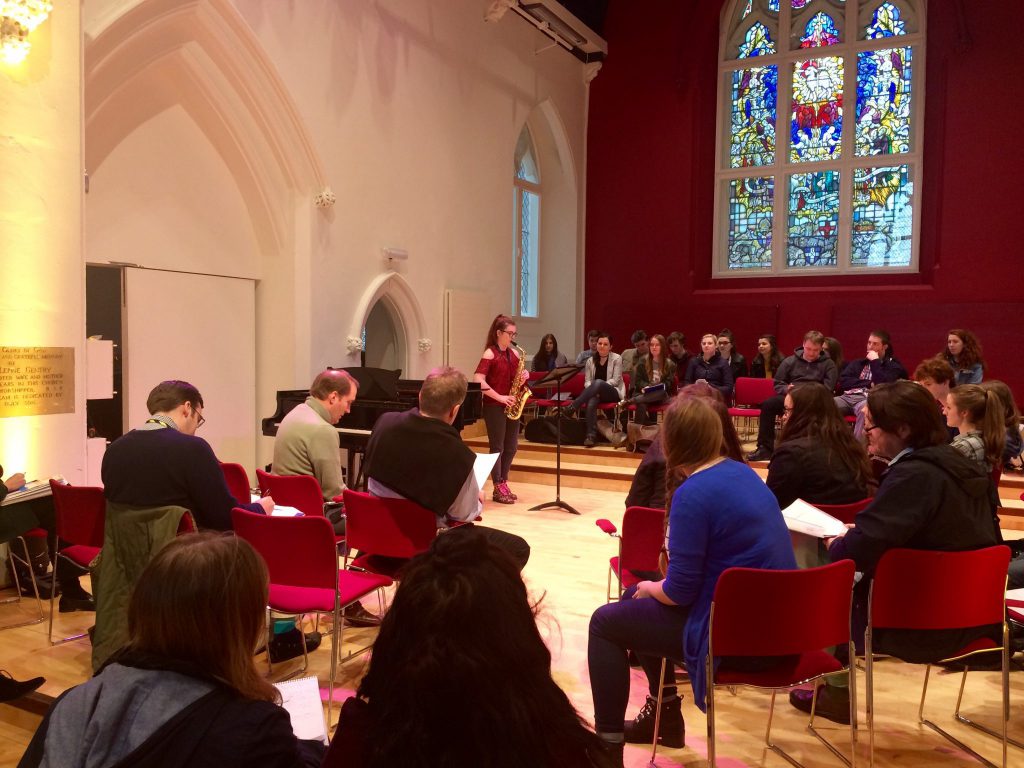 A Triumvirate of Broadstairs Music Events

Free for students, staff and the public

Next week on our Broadstairs Campus