Dr Chris Pallant of the School of MAD will reflect upon the publication lifecycle of one of his publications.

Dr Chris Pallant and Jo Samuel are putting the final touches to this year’s Anifest, a celebration of animation and Snow White and the Seven Dwarfs.

FREE TICKETS to all students, under 16s and over 60s.

Animators, scholars, and historians will gather to share knowledge around the subject of Walt Disney’s Snow White and Seven Dwarfs (1937) – a film that also celebrates a significant anniversary this year: it turns 80! The symposium will feature a keynote presentation by Dr Amy Davis (University of Hull), author of Good Girls and Wicked Witches: Women in Disney’s Feature Animation (2006) and Handsome Heroes and Vile Villains: Masculinity in Disney’s Feature  Films (2014).

A full programme of behind-the-scenes talks from high-profile animation insiders: Tom Sito (Disney/DreamWorks), Jim Parkyn (Aardman), Tom Box (Blue Zoo), and Samantha Moore (a documentary filmmaker who specialises in animation). Workshops for stop motion model making and animated flipbooks will also be offered. Throughout the festival there will also be plenty of chances to see this year’s shortlisted films that are in contention for one of the Anifest Awards. The Saturday programme is great for all the family and students of all ages.

You can see a documentary of last year’s event here: https://www.youtube.com/watch?v=yUajlO2AdqQ 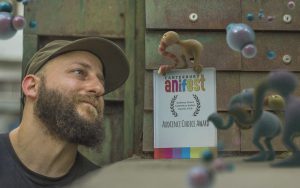