Multimodality in the Arts: interdisciplinary practices and hybrid forms

We are pleased to announce that the Centre for Practice Based Research in the Arts Conference will take place on 31 May and 1 June at CCCU.

Dr Andy Birtwistle, Reader in Film and Sound is to present an audio-visual extravaganza.

Research Seminar 3 May 2017 – Intertext, Anxiety, Iconography: Mapping the Meaning of the Moors Murderers and Yorkshire Ripper in Popular Music and Culture

Het Phillips, University of Birmingham, will explore the representation of the Moors Murderers and the Yorkshire Ripper in pop culture in our latest research seminar.

This lecture will use popular-musical representations of the ‘Moors Murders’ and ‘Yorkshire Ripper’ cases as case studies to examine the ways that pop culture has responded to and shaped, firstly, the figure of the celebrity murderer in general, secondly, the mythology surrounding these crimes specifically, and thirdly, designations of what is considered exceptional and what as ‘ordinary’ violence. In so-doing I will examine ways in which such self-consciously ‘rebellious’ forms construct themselves as questioning official history and respectable interests.

Featured in songs from punk, industrial and indie music from the 1970s to the present day, these killers’ proliferation as musical cultural commodities has emerged alongside the development of ‘alternative’ popular music and out of (and in turn fed back into) its mixed and often self-contradictory concerns around authenticity, fame, image, commodity, self-expression and transgression.

Drawing on Professor Lisa Downing’s work on the construction of the figure of the murderer as exceptional, as overlapping with the figure of the artist, and as the epitome of the individualised neoliberal subject (The Subject of Murder, 2013), and David Schmid’s analysis of the particular cultural forces that have shaped the modern serial killer into the apparently obvious and self-evident figure of fame and fascination (Natural Born Celebrities, 2006), I will demonstrate that the construction of these celebrity killers and that of the celebrity musician share many important facets and are mutually self-supporting in their mythologies and the kinds of cultural intertext they draw upon to create and maintain their exceptionality and commodity status as society’s ultimate outsider insiders.

Research Seminar: Dr Anna Claydon (University of Leicester) on The Creative Other: Music and Disability in Film

Dr Anna Claydon will be visiting Canterbury to discuss Music and Disability in Film.

The Creative Other: Music and Disability in Film
Speaker: Dr Anna Claydon (University of Leicester)

In this paper, Anna Claydon (from the School of Media, Communication and Sociology, University of Leicester) will examine how creativity is used to give voice and build agency for characters with disabilities in music films. Drawing on case studies of Sex ‘n’ Drugs ‘n’ Rock ‘n’ Roll (Whitecross, 2010) and Ray (Hackford, 2004) she will investigate the representational tropes and politicisation of the performer with disabilities through music within the context of considering the narrative functions of the characters as outsiders and the traditions of representing disability in film more broadly.

Dr Anna Claydon has taught at the University of Leicester since 2006 and teaches the last remaining music modules in the University as well as leading the film provision in the School. She is College PGT Manager and Director of IDeoGRAMS (the Interdepartmental Group for Research into Art, Media and Society). Her PhD (University of Kent) was on masculinity in 1960s British films but in addition to currently working on film music/music in film and disability she is working on the representation of artificial humans (with geneticist Chris Willmott) and digital devotionals (with Media colleague Jo Whitehouse-Hart) and editing a special edition of The Soundtrack on transmedia musics.

In 2013, Dr Feelgood founder, Blockheads member, Game of Thrones actor and musical legend Wilko Johnson was diagnosed with terminal cancer. With ten months to live he decided to accept his imminent death and went on the road. His philosophical response made him even more beloved and admired. And amazingly he didn’t die. This evening he discusses his life in music, his life with cancer and his life now in conversation with Shane Blackman, Professor of Cultural Studies at Canterbury Christ Church University.

Before starting his career in sociology and cultural studies, Shane Blackman worked in the music industry as a manager of an Our Price Records store in Oxford Street, London. He teaches pop music and youth cultures, as well as researching sociological and ethnographic aspects of young people’s culture.

Dr Andy Birtwistle will give the first of the School of Media Art and Design research seminars for 2016-17, on the materiality of recording media.

In a recently published collection on materiality in art, Petra Lange-Berndt asks, “what does it mean to give agency to the material, to follow the material and to act with the material?” Andy Birtwistle’s presentation aims to consider this question, focusing on the creative use of sounds produced by obsolete – or near obsolete – technologies of sound recording and reproduction.

Every sound technology has the capacity to generate as well reproduce sound: that is, the sounds usually referred to as “noise”. In the case of the cassette tape, noise is created by the oxides that coat the tape’s surface and which encode the magnetic patterns constituting the recording itself. Similarly, the distinctive surface noise of vinyl is produced by an encounter between two materials, as the needle scrapes along the walls of the recording groove. We might think of these sounds as the sound of technology itself – a sounding of the medium’s material and technological bases.

Andy Birtwistle’s presentation explores what the political potential of the sound of (obsolete) technology might be, explored through a discussion of material agentiality in his own creative work with audio cassettes.

The cassettes released on the Start Here label attempt to work with the form and materiality of the cassette tape as a medium, foregrounding and celebrating its unique qualities. Start Here is all about clearing away, stripping back and emptying out, so that these qualities can be perceived and appreciated more clearly. 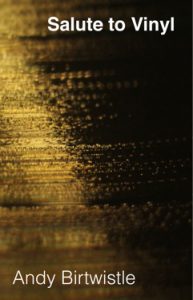 The label’s first release is Salute to Vinyl, which features the surface noise recorded from both sides of a blank long-playing vinyl disc. This sound is generated by physical contact between the turntable stylus and the moving surface of a vinyl record. The continuous sound that results from the friction between these two surfaces is interspersed with intermittent sounds produced when the stylus encounters the damaged wall of a recording groove or particles of dirt. This is the sound of vinyl, brought to you through the medium of magnetic tape.

Copies of Salute to Vinyl are available from Chimpsonic and will make ideal summer listening on your Walkman.

Performance Lecture: November 25: ‘You Say You Want A Revolution…?’