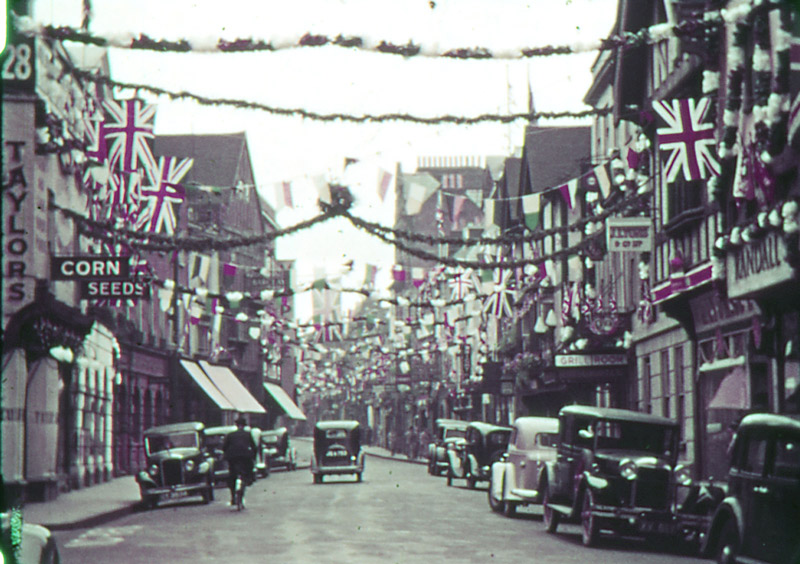 During the past 4 years Tim Jones, Senior Lecturer from the Department of Media, Art and Design has been carrying out research on amateur film-making in the local area. He has discovered a number of collections of films showing the Canterbury district in the 1920s and 1930s.” When I started this research I was expecting the amateur films to be of poor quality. Often when you think of amateur filmmaking you think of wobbly camerawork, babies on the lawn and boring holiday films. However, I’ve been really amazed at the quality and professionalism of many of the films that I’ve discovered.” One of the most exciting discoveries was a collection of 72 films made by Sydney Bligh. He made newsreels of Canterbury during the 1930s, many of which were in colour. These now represent a unique record of life in Canterbury before the war. Highlights of which include film of T.S. Eliot when ‘Murder in the Cathedral’ was first performed. There is also film of Count Zborowski, the millionaire racing driver who was the inspiration for Chitty Chitty Bang Bang. This 1924 amateur film is a drama made in the style of silent films of that era and features the 15 inch gauge railway that ran for a mile around his estate. The discovery of this film was particularly exciting to railway enthusiasts as it had been thought that no photographs or film existed of this railway.

Tim has also found a number of other collections of films and more are still being discovered. “Recently I found two important collections in one week. The first came from a house about 100 yards from where I live and the second came from Australia!” Tim is confident that there is still more film to be found.” It is important to understand that if you have cine film stored somewhere such as a loft or in a shed it is almost certainly decaying. Film needs to be kept at a cool constant temperature with low humidity. So please do let me know if you have any film you think might be of interest so that I can ensure it is kept for posterity.”

Tim gives regular screenings of the films that he has discovered to the local community. These are often lively affairs where the audience participate very actively.” At the screenings I specifically tell the audience that they are allowed to talk during it and shout out answers to any questions I pose. It’s quite common for me to solve mysteries I have been pondering in this way.” The project has also involved the community in other ways. A number of volunteers now spend their spare time cataloguing the films, writing detailed descriptions into specialist software.

In addition to providing screenings to the local community Tim is in the process of producing a number of documentaries about the amateur filmmakers.” This is an area of research that has been barely touched. I believe it’s important to record and collect as much information as I can about the early history of amateur cine while this is still possible. This area of research has been so interesting I can see myself being involved in it for many years to come.”