The History of The Rainbow Flag – Celebrate Pride.

The History of The Rainbow Flag – Celebrate Pride. 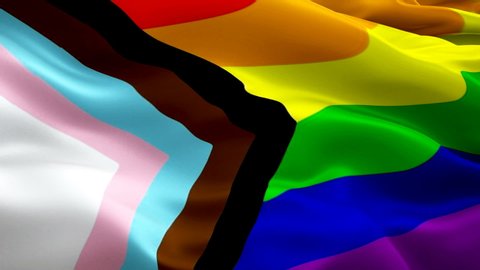 These days we see rainbow flags flying everywhere. We see them on public buildings, in shop windows, across streets; while also being incorporated into clothing, pins, badges, stickers and cakes. We see it as a way of life and celebration. Of community, unity, life and happiness. But where did it come from? Was it always seen this way? Was it always as we know it?

Where did it begin?

Who was Harvey Milk?

The first Pride Flag had how many stripes?

Harvey approached his friend and fellow rights activist Gilbert Baker, with the idea of a new symbol for the LGBTQ+ community. Why Gilbert? Well he was also well known for being an artist, designer and drag performer, who made many of his own outfits. This was a light bulb moment for Gilbert as he had been exploring the possibilities of a flag representing the LGBTQ+ community for a couple of years, prior to his conversation with Harvey.

So the idea of a rainbow flag was born ?‍?.

‘Our job as gay people was to come out, to be visible, to live in the truth, as I say, to get out of the lie. A flag really fit that mission, because that’s a way of proclaiming your visibility or saying, ‘This is who I am!’

The creation of this flag was an important opportunity for Gilbert and so he rented out a space and recruited friends and colleagues from the LGBTQ+ community to assist in its creation. The creation of this first flag was long and time consuming due to every process having to be done by hand, from dyeing the stripes to sewing the stripes together. All their hard work paid off and the rainbow flag, made from eight colours was complete.

Each stripe had a specific term attached to it by the group, to give each colour and the rainbow flag in general meaning, these were:

The completed flags were first displayed and used on June 25th 1978 for the San Francisco Gay Freedom Day Parade.

Who was Gilbert Baker?

However, several months later disaster struck. In November of 1978 Harvey Milk was killed by a disgruntled worker. This had a huge impact on the LGBTQ+ community; but not all bad. The LGBTQ+ community came together to show their love and admiration for Harvey and wanted a symbol to embody this. It was at this point the rainbow flag took on a whole new meaning and popularity soared.

This was great for Gilbert Baker and his group; unfortunately there was a problem. Gilbert approached the Paramount Flag Co. to start producing the flag in bulk to meet demand. They informed him that the hot pink was not a colour in very high demand and generally not available for mass production. Due to this the decision was made to remove this stripe from the flag.

It wasn’t long before the rainbow flag was changed again; in fact it was the following year 1979! Increasing in demand, it wasn’t just individuals that were trying to get their own rainbow flag. Now organizers for protests and pride parades were looking to Gilbert to provide rainbow flags to decorate the streets, squares and gardens.

Going the distance with the rainbow

In 1994 the LGBTQ+ community were observing the 25th anniversary of the Stonewall Riots. As a challenge to himself, but also a show of celebration for the anniversary and the work Stonewall had done since, Gilbert Baker created a mile-long rainbow flag. This, in itself, was seen as a historical moment, being recognized by the Guinness Book of Records as the world’s largest flag. This was revealed at the Key West Pride in Florida and carried through the streets by about 2000 volunteers, representing a wide range of human identifiers (age, sexual orientation, ethnicity).

In celebration of the 25th anniversary in 2003, Gilbert Baker made the decision to return to where it all began. He recreated the original 8 stripe rainbow flag (colour production of fabric had become a lot more available, than it was in 1978). Whether he hoped the original 8 stripe would become more of a focus moving forward or that it was a special one off is unclear; either way the 6 stripe appeared to be here to stay.

Designer Collection at the Museum of Modern Art

In 2015 Gilbert Baker’s rainbow flag was added to the MOMA (Museum of Modern Art) Collection in New York. The MOMA collection was created as a way for all items of historical importance within all aspects of art to be preserved. A physical placement was given in the museum on the same day that the US Supreme Court made the life changing decision to legalise same sex marriage across the United States.

When the lights go up, the rainbows fly

Over the past few years there have been occasions where countries have wanted to celebrate and show their love for the LGBTQ+ community. Be it during LGBT History Month, or to celebrate Pride or more recently in loving support for the legalisation of same sex marriage. During these times we have seen monuments and buildings of significance illuminated in bright lights, representing the rainbow flag.

Year of the emoji

In 2016 it was proposed that an emoji symbolising the rainbow flag should be created and made available to the public, giving those within the LGBTQ+ community representation; as well as providing a symbol that could be used to celebrate Pride month.

Since then emoji’s representing the wide variety of LGBTQ+ flags have been made available, including character emoji’s depicting same sex couples.

To celebrate the 39th anniversary in 2017, while possibly also having some political undertones, Gilbert Baker made the decision to add a 9th stripe. He only created nine of these flags, adding the colour lavender above hot pink with the decision that it would represent diversity.

The passing of an artist

Gilbert Baker passed away in his sleep not long after creating the 9 stripe flag, he was 65 years old.

Progress points to the right

In 2018 an artist and designer by the name of Daniel Quasar created a new flag. Being non-binary, Daniel felt it was important to start representing the many different aspects of the LGBTQ+ community in one flag. What would become known as the progress flag now included black, brown, light blue, pink and white, representing the Trans community and those from minority groups. “The arrow points to the right to show forward movement, while being along the left edge shows that progress still needs to be made.” Daniel Quasar, 2021.

This flag has now become quite popular amongst the LGBTQ+ community and its allies. However, it has always been made clear that the progress flag was never designed to replace the rainbow flag, more run alongside it.

As recent as this year, 2021, Daniel Quasar’s progress pride flag was updated to include and represent the Intersex community.

Colour can mean everything

In the past 40+ years the rainbow flag has become pretty well known around the world, through the LGBTQ+ community and beyond. Yet, everyone of those individuals could say that the flag means something totally different to each of them, That it makes them feel something different, that it takes them somewhere different.

The rainbow flag was designed to bring us all hope, to share the love and enable us all to feel ‘it’s ok to be me’!

But wait, there’s more! (more flags that is)

What do we think or feel when we see the rainbow flag?