First some advance notice: Dr Lesley Hardy will be giving a lecture to the Lyminge Historical Society on Tuesday 3 November at The Tayne Centre at 7.30pm. She will be speaking on “The Romans are Coming!”, so if you are interested do please go along to listen. Secondly, Dr Martin Watts will be going to visit the Sandwich Museum archives at the beginning of next week to examine the sources held there. These include a number of photographs showing features of Port Richborough such as the wharf area with railways, the important RoRo train ferry, and structures like the accommodation huts and workshops. Other primary sources he intends to consult are the sale posters produced for the sale of the port and its effects after the Great War, all of which should help Martin begin to piece together the port’s development, and he will also take advantage of books that have been produced to tell the port’s story. This is an opportune moment because the local archivist will be featuring the Port in a display next year to mark the centenary of 1916.

These are not the only historical activities taking place in and around the two universities. However before I mention these, I thought I would also let you know that Early Medieval Kent, 800–1220 is coming on very well. Next week should see the essay collection reach the desk of Boydell’s copy editor and, all being well, the proofs should be with me and the various contributors at the end of the year or the beginning of January. Their chief editor has allowed us to add in more colour, as well as black and white images, which will be a real bonus and many thanks to those, including Canterbury Archaeological Trust and Canterbury Cathedral Archives and Library, who have produced these at very short notice. Whether this final volume in the Kent History Series will be available at the Medieval Canterbury Weekend is still not clear, but I am very much keeping my fingers crossed that it will. It would also be fantastic if Later Medieval Kent, 1220–1540 was also available – the first print run sold out within a year of publication in 2010 and it has not been reprinted since – and even better if it was softback rather than the more expensive hardback. However this is way outside my control. 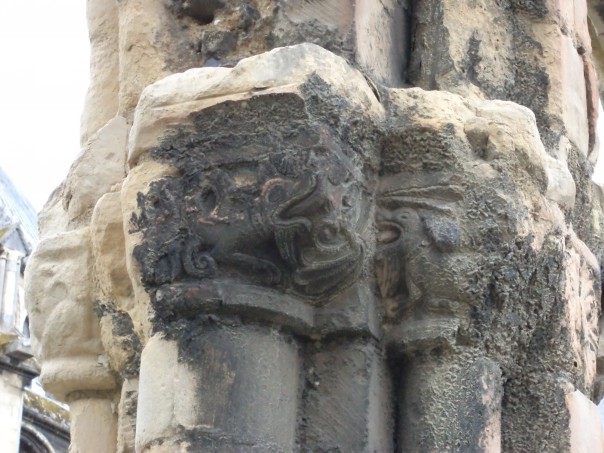 From Lanfranc’s Infirmary building at Canterbury
So what is it? And is it more of less friendly than the dragon nearby?

To return to lectures and conferences that have taken place in the last week, on Wednesday the Canterbury Historical and Archaeological Society welcomed Peter Tann to Canterbury Christ Church to discuss Faversham’s copy of the 1300 version of Magna Carta and why the leading citizens may have sought their own copy of the charter at that particular time. Faversham is indeed fortunate to have preserved this and other charters belonging to the town, as would have been obvious to anyone who saw the Faversham Magna Carta exhibition earlier in the year, either in the town itself on when it ‘went on the road’. Not that Faversham was unique in its bid to acquire or preserve a degree of local autonomy in the early years of Edward I’s reign, when the monarchy was seeking to claw back power to the centre lost during the difficult times of his father, but, as Peter Tann showed, it does make an interesting story. For those who may be interested in the comparable events at Sandwich, I would recommend Dr Justin Croft’s article in Archaeologia Cantiana 117 (1997), freely available on the Kent Archaeological Society website.

Then yesterday I attended a joint afternoon conference involving the Council for Kentish Archaeology, the Kent Archaeological Society and the University of Kent, which was entitled ‘Archaeology along the North Kent Coast’. Geographically we moved from Hoo in the west, discussed by Dr Gillian Draper, via Faversham (Dr Brian Philp) to Thanet in the east with Ges Moody, and also heard about Great War defences all along the coast from Simon Mason, a late replacement for Richard Taylor. Gillian Draper drew on her work for English Heritage in terms of Hoo’s development from medieval to modern times, and some of this material informs her chapters in Early Medieval Kent on colonization and settlement, and towns in the formative period either side of the Norman Conquest, and into the 13th century. Another aspect of the day that particularly interested me was Brian Philp’s description of his team’s 55-day excavation in 1965 of the Faversham Abbey site, an excavation that had to contend with dire weather conditions and a generally lacklustre government bureaucracy. Nevertheless his team appears to have performed miracles in a very short space of time, including ‘aerial photography’ by a poor man at the top of a long ladder held at the bottom by two of his companions. Among the discoveries, all of which were detailed in a book of the excavations published in 1968, were that the disproportionate length of the chancel to the nave pointed to the abbey church indeed having been conceived as a royal mausoleum. Sadly the two very deep bits found towards the west end of the chancel were only filled with demolition material, including beautiful fragments of painted plaster but neither King Stephen nor his wife and son, nevertheless this is important in itself. For those interested in the layout of medieval monasteries, Dr Philp’s associated discovery is also exciting in that because of the length of the chancel the cloister could not be fitted into the space bounded by the nave and north transept, and thus had to be set further back. Other discoveries were also made by the team and if you are interested I suggest you track down this 1968 publication, which is available second-hand from a number of booksellers at a very reasonable price for such an important medieval site.

I believe next week will be quieter but you never know …