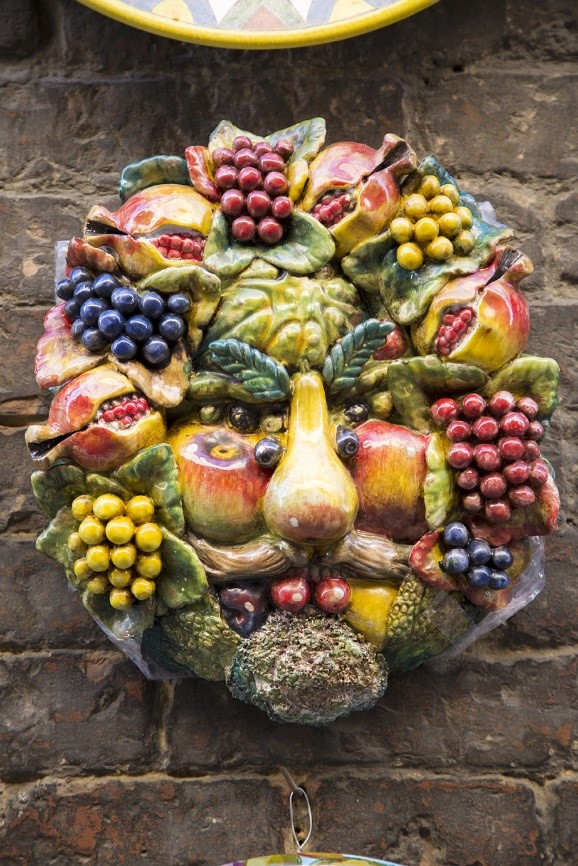 Dr Sara Wolfson’s students ask what we can learn about the Renaissance court through art, architecture and material objects.  In Part I, Sharon Ardley and Victoria Mitchell wrote about Marcus Gheeraerts the Younger’s Queen Elizabeth I also known as ‘The Ditchley portrait’ (their post can be found here: https://blogs.canterbury.ac.uk/humanities/power-splendour-and-diplomacy-understanding-the-early-modern-royal-court-through-objects-part-i/).  In Part II, Edward Shooter undertakes architectural and diplomatic analysis of the Banqueting House at Whitehall. https://blogs.canterbury.ac.uk/humanities/power-splendour-and-diplomacy-understanding-the-early-modern-royal-court-through-objects-part-ii/.

Now in the final blog on this topic, Klara Klaric and Phoebe Neyton consider what can we learn about the early modern court of Rudolf II through art. 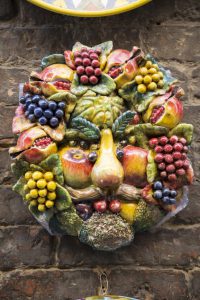 But like the learned men of Egypt, the most loyal servant Arcimboldo dedicated his heart and work to your glorification and covered your godlike visage with a veil. Despise not lesser things! When God created Earth, he too found pleasure in small things. Things far smaller that those with which the high and mighty among men show their great and admirable power.

Poem by Gregorio Comanini, an Italian scholar, on the portrait of Rudolf II as Vertumnus.

For those that ruled their early modern courts, a portrait was commissioned as a statement of magnificence, a propaganda machine that displayed the finest qualities found in a ruling monarch. Basically, the portrait had to impress. And certainly, Giuseppe Arcimboldo’s Vertumnus did!

The arrangement of fruits, vegetables and flowers form a flattering, but bizarre, unofficial portrait of the Holy Roman Emperor, Rudolf II (r. 1576-1612). Mannerist painter Arcimboldo is best known for his whimsical portraits of human faces, assembled from all manner of objects that best displayed the person that he was painting. For Rudolf, he used flora, a dedication to the Roman god the emperor was styled after – Vertumnus, the god of season and metamorphoses in nature and life. Yet, underneath the arrangement, Vertumnus seems to reveal an enigma about the emperor: a surrealist masterpiece painted in the Renaissance; a strange private portrait of a powerful eccentric emperor; a true child of the humanist thought. From a deeper study of the painting, we found that it was able to tell us a lot about the Renaissance Imperial court.

From the offset, the portrait reflects the personal taste of the early modern ruler, and his great patronage towards the arts and occult sciences. Vertumnus resided in Rudolf’s great Kunstkammer, or ‘cabinet of curiosities and wonders’, a private collection that was not accessed by all. But, the collection received great contemporary reviews (at the time), many praising its quality and originality. With such good reviews, it can be suggested that the ruler set the trends while the court followed behind.

BUT, not all shared the same view as Rudolf.

Rudolf’s great love of arts meant that he side-lined his role as a political leader, leading to some very disastrous failures under his reign. The beginning of the Thirty Years’ War (1618 – 1648) being one of them. So, an unpopular ruler needed a statement portrait, and Arcimboldo surely provided this to a tee. Rudolf as Vertumnus promoted the emperor’s reputation as the true versatile Renaissance man, a homo universalis. The courtiers practiced the language of symbols, using ideas that best represent the message they are giving, as well as contributing to the aesthetics. Arcimboldo use of fruit and vegetables in composing heads would seem ridiculous unless there was a deeper meaning to discover. For Vertumnus, the deeper meaning lay with the symbolisation of a perfect balance of nature that his reign represented; a united land jam-packed with peace and prosperity. One poem described the painting as ‘the emperor holds sway over the seasons as he does over the countries of the world’. Furthermore, the use of Roman mythology, rather than Catholic legends, suggests a humanist worldview rooted in the minds of courtiers from their knowledge of antiquity.

Just as much as Rudolf wanted his Vertumnus to represent his competence as a ruler, it does reflect a personal detail. His cabinet was a private collection, more of a microcosm where Rudolf had ultimate power and the ability to create his own world. Possibly demonstrating that it became a refuge from the demanding life at court that he deeply disliked. And Vertumnus was the alternative to his public strict image that was portrayed in so many other official paintings. Or, the exceptional painting reflects the nature of the Austrian court, more relaxed and open, a true demonstration of what Rudolf’s court was really like to outsiders.

Vertumnus is a part of the collection at Skokloster Castle, Sweden: http://skoklostersslott.se/en/paintings/giuseppe-arcimboldo