Hawker of Morwenstow – Some Thoughts on the Harvest Festival 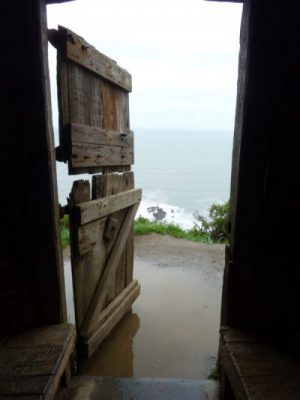 According to a dominant strain of thought now current in British universities, knowledge is some kind of economic good that ought to be utilised within the prevailing socio-economic order. Knowledge is no longer an end in itself, but something that needs to be harnessed as a means of economic production. According to the “guru” of managerialism, Peter Drucker, anyone working in the new knowledge economy who acquires knowledge for the sheer delight or enjoyment of it is now ‘a problem’. Such people are described as ‘just polishing stones or collecting footnotes’, miserably failing to connect their work ‘to the needs of the whole’ (which are, of course, the needs of business corporations). (1)

Drucker’s dismissal of non-productive knowledge-sector work as ‘just polishing stones or collecting footnotes’ puts me in mind of something once said by the great philosophical prophet of the British Labour movement, Thomas Hill Green. He was talking about the Victorian priest-poet, Gerard Manley Hopkins. The priesthood to which Hopkins was called, Green complained, ‘does nothing to organise life… [but] merely picks up a few stones that will take the saintly polish’. Christian priests, he said, were content to ‘go into a corner… and polish a pebble or two’. (2) Hopkins, it should be noted, polished poetry of exquisite beauty and dazzling complexity.

Another Victorian priest, the Revd Stephen Hawker, did not collect pebbles from the beach. The parish of Morwenstow on the north Cornish coast overlooked one of the most dangerous shipping routes to Bristol and wrecks were routinely smashed on the shore. Hawker built himself a ramshackle hut on the cliff top where he would alternatively meditate or watch for sailors in danger. It is still there today.

Hawker was made famous when Sabine Baring-Gould – writer of the hymn, ‘Onward, Christian Soldiers’, as well as an influential study of lycanthropy – published his colourful biography, The Vicar of Morwenstow. Baring-Gould’s book is not strictly accurate but makes good reading. He turned Hawker into an outlandish character and emphasised his eccentricities. These included his keeping of a pet pig which accompanied him about the parish, the excommunication of his cat for killing a mouse in church, occasionally dressing up as a mermaid, something to do with pixies and fairy-rings, and opium-eating. Later biographers have tried to sort fact from fiction. 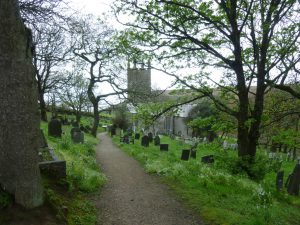 What we do know is that Hawker’s parishioners were hard work. Living on the edge of subsistence they habitually turned to wrecking for survival. They told themselves it was bad luck to save a drowning man. Life seemed to depend on grabbing as much cargo and goods from the shore as possible. The more wrecks, the better. Hawker, appalled, did his best.

Much of his best work focussed on charitable work for the most desperate. He strongly encouraged almsgiving, and pushed the habit of taking a weekly collection for the poor. He also made a special collection at this time of year. Baring-Gould claimed that the modern service of harvest thanksgiving was first introduced by Hawker in 1843. He revived the custom of celebrating Lammas Day (October 1st), when the Eucharistic bread was made from corn reaped from the new harvest. (3) Hawker gave the first fruits of the harvest to those who needed them most. This was the basis of the modern Harvest Festival.

Of course, that’s not all Hawker did. The cliffs at Morwenstow tower above a fearful rock shore. Layers of geological strata turned crazily through 90 degrees have been sharpened by a furious sea. It is not a welcoming place. Hawker made it his job to collect what was washed up.
Baring-Gould painted a grim picture of the task to hand.

“After a storm, the corpses are fearfully mangled on the sharp rocks, and are cut to pieces by the slate as by knives; and bits of flesh come ashore. These are locally called “gobbets;” and Mr. Hawker after a wreck, used to send a man with a basket along the beaches of the coves in his parish, collecting these “gobbets,” which he interred in his churchyard on top of the cliffs”. (4)

Quite clearly, this is a long way from ‘just polishing stones or collecting footnotes’. 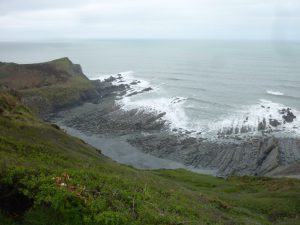 One last footnote. I would not be surprised if the university practice of setting “gobbet” questions in examinations – extracts from texts for translation or comment – has something to do with Hawker. (If you are unsure, a quick internet search will give you several examples from Learning and Teaching documents). Hawker had been an Oxford man, and it is easy to imagine his memory pressing itself into the mind of a more ghoulish type of ecclesiastical historian. When you next see a “gobbet”, please remember the Revd Robert Stephen Hawker of Morwenstow.