A New Book about Buddhist Philosophy 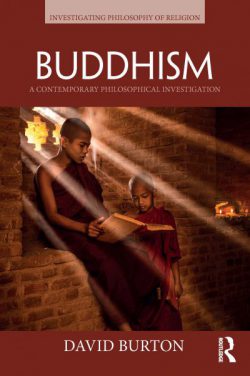 About six years ago, I was invited to write a book for the ‘Investigating Philosophy of Religion’ series, published by Routledge. This attracted my interest because Buddhism and philosophy of religion have fascinated me for over three decades. I have taught university modules about Buddhism for many years, and felt that I had plenty to write! Previously, I have published two books and various articles, but felt that my understanding has developed a lot and I was eager to share my new ideas. I was also aware that there are many books about philosophy of religion but most of them are from a Western and Christian-centred perspective. Little attention is given to philosophy of religion from the vantage points of Asian religions. I thought that I could address this lack. I found this book challenging to write, especially given the other demands on my time at a busy British university. However, it has finally been published with the title Buddhism: A Contemporary Philosophical Investigation. I offer new insights into Buddhist views about issues such as the problems of suffering and evil, karma and rebirth, freedom and determinism, the nature of religious language, religious diversity, and the relationship between Buddhism and science. I show that Buddhists disagree with one another in very interesting ways! There are debates about whether Buddhism is best described as a religion or philosophy. I argue that Buddhism is both! I’m delighted that the book is now available and hope that it is of interest to many.

Buddhism: A Contemporary Philosophical Investigation (Routledge, 2017) by David Burton is available online and at a special reduced rate in our university bookshop.